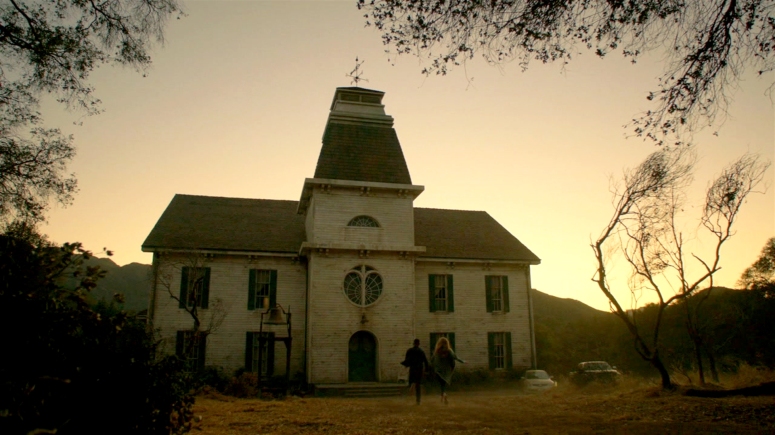 This season is like tasting Mountain Dew Baja Blast for the first time. This season is so vastly different than any in the series and it blows our mind. Refreshing like a Gatorade during a hangover and more satisfying than a cold pool on a hot summer day. We loved this season of AHS so much that it brought us back to the days of Coven and Asylum all over again. Not only does pretty much EVERY familiar face return, including Gaga, but we get some fresh new faces as well.

This season has not yet been uploaded to Netflix but it will be soon so we suggest you get to watching if you are not caught up. This is the 3rd best AHS season and rightfully so. Gaga has a much smaller role in this season but the plot is a million times better than Hotel.

The season begins like an ID channel style show or paranormal documentary show. It is set in present day in Roanoke, North Carolina but will reveal flashbacks and plots from the 16th colony of Roanoke and what happened to them. The story for this season is actually mentioned and talked about by Billie Dean Howard, the medium played by Sarah Paulson in AHS season 1, Murder House.

Basically it is a reality TV haunted stories recap type show. The real people are being interviewed while the show uses actors to recreate the horrors at Roanoke. The segment is labeled : “My Roanoke Nightmare” and is much scariest season since Asylum.

The whole season is a new fresh approach the television as a whole. The paranormal documentary style makes it all the more exciting when you can see the real people being interviewed while the events play out. It makes it seem so real and it relates to the reality TV junkie inside us all. The interviews are spot on with what a haunted/ horror story show is like. The acting this season was absolutely superb.

We are not going to spoil anything for you but halfway through the season, the reality show ends. And we see that it is in fact a popular show similar to the level of AHS itself. We see the actors and real life people it is based on reaping the rewards and success their TV made. The reason this doesn’t give anything away is because you go into the first episode knowing the people being interviewed are obviously still alive. Or are they?

The second half of the season is about the TV network and producers making a Bi Brother type reality show. They want to bring all of people interviewed who experienced the Roanoke nightmare themselves in the house with all of the actors who portrayed them for the show.

The second show is called “Return To Roanoke: Three Days In Hell”. This return requires everyone to give up all communication devices and are given video only cell phone to record their version of the story in that evil house. Also random side note, the woodsy, dirty brunette witch woman is Lady Gaga. She has a very small role but it was revealed that her character was the very first Supreme. This means she was the first witch there ever was, meaning she is the Supreme of every witch that has ever been and ever will be.

There are hidden cameras set up all through out the house so the cast is being fully recorder 24/7 like in Big Brother. Also the house is outfitted with rigged traps and planned spooky stuff to attempt to scare the residents. The ironic part is that no one, not even the people who went through the Roanoke nightmare the first time, could expect the horrors that await them.

This season gets pretty gruesome, violent and graphic. There are some really intense moments like in all seasons of AHS. The suspense is the absolute most intense of any season. Every episode will have you on the edge of your seat, longing for more. We actually strongly recommend that you binge the whole thing in large portions as waiting week by week was a big struggle.

If you can’t wait for Netflix, download the FX app on your streaming device. All you have to do is sign in with your cable provider like HBO GO and you can watch anything FX has to offer including this season of AHS. It is very much worth it for this wonderful season if you have not yet seen it.

We expect huge things for the next season of AHS after having this wonderful refreshing new style of AHS. We loved that they decided to take a risk and it really pays off. This is the first season, since Jessica Lange left, that we really felt AHS was back at its roots. The AHS mix of suspense, scary and disturbing is a formula that cannot be beat.

We have now given you all the necessary information on every single season of AHS. There is so much more we could have said if we were able to reveal major spoilers but we want all of you to experience every season like it is meant to be. Each season is incredible and has been nominated for tons of Emmy award every single year. The Emmy’s don’t define whether a show is worthy or not but they did not get this one wrong.

We highly recommend this season for everyone. We hope you enjoyed our reviews for AHS week. We will not make a habit of reviewing shows season by season, but given the nature of AHS we think it is well deserved.

We will reveal that some characters from earlier seasons to make an appearance in the newer ones. For instance, Pepper from Asylum also appears in Freak Show along side Dr. Hans Gruber and Sister Mary Eunice . Queenie from Coven appears in Hotel, as well as Billie Dean Howard and Marcy from Murder House. The best crossover is in Roanoke when we see Lana Winters return from Asylum.

A few other things we know about the future of AHS. There will be a second Coven type season following the aftermath of the witches. There is also a rumor that season 7 will heavily feature the horrors of the 2016 U.S.A. election. There will be more crossover characters as it has also been said that AHS will somehow eventually link all the seasons together for a big picture kind of reveal. We can only imagine we will see more of Gaga’s Supreme character in the future.