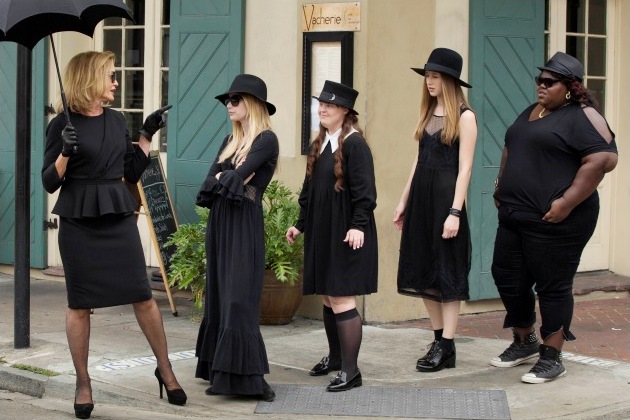 On Wednesdays we wear black. American Horror Story Coven is the most iconic and popular season that the series has ever had, and for good reason. Probably the best thing to happen to witches in pop culture since Hocus Pocus. Coven excels with its fabulous plot, outstanding fashion and use of current issues like racism, religion and the afterlife in order to make the best season AHS has ever created.

The Coven begins in present day 2013 in New Orleans, Louisiana. The story follows of coven of witches based out of Salem who took refuge in New Orleans. The season does feature several flashbacks to the 1800’s and early 1900’s as well as 1970’s. The flashbacks help tell the whole story of the Coven and how everything came to be in 2013.

The show begins with Zoe Benson (daughter in AHS Season 1:Murder House) who has what we like to call a “killer vagina”. Basically when she has sex, the men die. She also exhibits supernatural abilities so her parents have her sent to Mrs. Robichaux’s Academy. Basically a school for witches. When she arrives she meets the other witches, most of whom are returning AHS alumni.

The other witches include Nan (Addie from Murder House) who has the ability to hear others thoughts. Madison Montgomery (Emma Roberts aka Julia Roberts niece), who is telekinetic and a total bitch because she was a former child actor. Queenie played by Precious herself , who is like a human voodoo doll. This means any pain she inflicts on herself hurts the other people and not her. Then there is ever free spirit, Misty Day, played by alumni Lily Rabe from Asylum. Misty has the power to bring people back to life and is obsessed with Stevie Nicks.

Basically the girls go to a frat party and Madison is drugged and raped by some frat boys so when flips the bus and kills them all. The only good guy who had a thing for Zoe was Kyle aka Evan Peters. Because he died in the crash Madison and Zoe take different body parts from all the dead frat boys to try and “rebuild” Kyle resulting in a Frankenstein type monster. Because he has different parts, he is different people trapped in a body and is eventually taken to Misty who heals his wounds and tries to nurse him back to health. Kyle becomes the guard dog of Coven.

The Academy is run by Cordelia Foxx aka Sarah Paulson in her second best role to date. Cordelia does not seem to possess any powers like all the other witches and spends most of her time making potions or studying plants. She is always considered second best or weak compared to her mother, The Supreme, Fiona Goode.

The Supreme is a witch who is basically like the Queen of all the witches. She embodies the Seven Wonders of Witchcraft. (We will list the Seven Wonders later in the post) She can use any power a witch can have and can either be a good ruler or a selfish one. With all that power some witches decide to only look out for themselves. The story of how the Supreme rose to her power is told throughout the series.

That story is one of the best plot lines for our current (and always) Supreme, Fiona Goode played by Jessica Lange. This role won Lange her third primetime Emmy award and it by far the best character she has ever played in any TV show or movie. “Who’s the baddest witch in town?” FIONA GOODE. So there is a catch to being the Supreme. Many have come before Fiona and many will come after her. The Supreme starts to lose her beauty, youth and health as a new Supreme rises. This means that one of the new girls in Coven is going to take Fiona’s place and she is not happy about it.

Fiona’s goal is to kill any witch that shows signs of new stronger powers so that she can remain reigning Supreme. The fun mystery is who will it be? The witches must complete the Seven Wonders. Which is a fun song by Stevie Nicks who is heavily featured in the show as a fellow witch. I mean how much greater can this season get and we are only halfway through the review. IT GETS BETTER.

4) Teleportation-  moving from one place to another in an instant

So besides the Supreme drama and the Seven Wonders, the Coven have many enemies. From Witch hunters to Voodoo Queens their problems keep piling up. There are many characters that are actually in New Orleans history that come into this season.

Marie Laveau, the same one who is named after the house of voodoo on Bourbon Street, is played by the incredible Angela Bassett. Marie Laveau is the voodoo Queen and hates the Coven because they are involved in a rivalry old as time. There had been a truce put in place between the two until Fiona Goode decides to pay Marie a visit. Since Laveau has been given immortality by a voodoo spirit called Papa Legba, Fiona tries to cut a deal for the same gift. Papa Legba is basically the Devil in this season and everything he gives to anyone comes with a huge price. Laveau has to steal a newborn child and sacrifice it to Legba every year in order to keep her immortal status.

After an unsuccessful attempt at immortality Fiona frees Laveau’s immortal prisoner, the second historical figure from the 19th century, slave-killer and super racist Delphine LaLaurie. Madam LaLaurie also has a house in New Orleans you can visit and was an evil slave murderer back in the 1800’s. Laveau cursed her with immortality because she tortured Marie Laveau’s lover as well as an person of a different color she came across. Marie then buried LaLaurie in the ground to spend eternity listening to everything but seeing nothing.

Fiona also hates LaLaurie for being a hateful racist put frees her and assigns her as the maid to the Coven. Specifically to follow Queenie (Precious) around and serve her every need. The other help in the house is the mysterious and mute butler named Spalding who is just super creepy and loves baby dolls and creepy stuff. He seems to be working with Fiona and is a vital part of her story.

Fiona’s other rival since her inception in the Coven in Myrtle Snow. The AHS alumni, Frances Conroy, plays one of the witch council members named Myrtle. The witch council also features Leslie Jordan who is as fabulous as always. The Supreme is suppose to answer to the witch council and they make decisions and deal out punishments for witches who do not follow their code of conduct. Myrtle is a mother figure to Cordelia and Fiona’s first rival for the Supreme when they were young.

We know that our post seems like more story than we usually tell but this tale is worth all the explanation we have given plus so much more. Literally we got this season on DVD for Christmas the year it came out because it is SO GOOD that we wanted to always be able to see it no matter where we are. THIS IS OUR HIGHEST RECOMMENDED season of any show on Netflix. It is life changing and extremely binge worthy.

Like all of our posts we don’t want to spoil anything for anyone who has not seen it, but the ending is fabulous and scary. The whole Seven Wonders thing won’t happen till the finale but they do try and practice the wonders throughout the show. So you do get to see different witches accomplishing the different wonders at various times. The mist interesting is the one where they leave their bodies and go to their own personal hell.

There is no part of this season that wasn’t flawless or uneventful. EVERY EPISODE is amazing. Ever plot and story told will have you freaking out faster than using a ouji board in a haunted house. If you love TV, AHS, are addicting stories than this season is for you.

Now we recommended that you watch Asylum first but this really is the better season overall. Now it is all about voodoo and witchcraft put it is not “evil” in any sense. So we have no warnings for you and to be honest this is actually the LEAST scary season of the entire series.

This is our number 1 choice out of ALL the seasons AHS has given us. It reaches new heights and levels of amazing while becoming a pop culture phenomenon and being one of the best/ most original stories ever told. Every character of this season will be your favorite. Every episode will break your heart and then put it back together again. And the finale may be the best hour of television we have EVER EXPERIENCED.