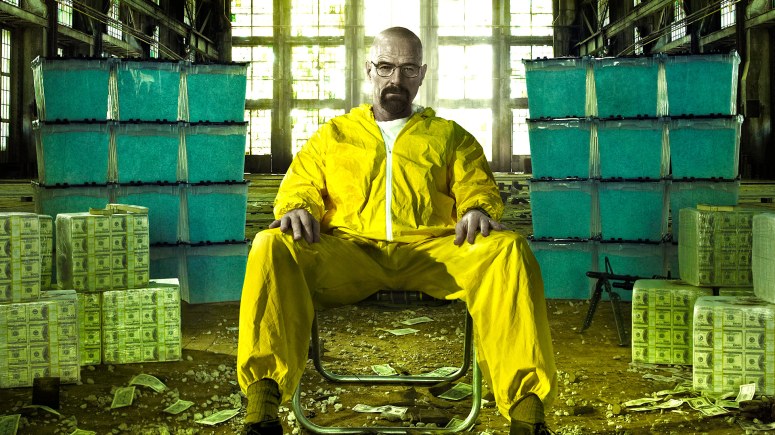 Rules are meant to be broken and no one breaks anything better than Walter White. Breaking Bad is as addicting as doing crystal meth but with a lot less life altering consequences. This is one of the best shows of our generation and deserves all the over hyped praise it got. We understand how people think that a show everyone has talked about or loves means it is overrated. But once in a while a show comes along that breaks all the rules.

The show centers on (favorite character alert), Walter White aka the amazing Bryan Cranston. TBH Bryan Cranston could take a shit on TV and he would be praised for it. He is excellent in this series though and really deserved all the praise he got, even if it was a bit over done at times.

Walter White is a poor, boring, unhappy chemistry teacher for a high school. The show begins with Walter getting lung cancer and being told he will not live. He then decides to try his best to leave his bitch of a wife, Skyler White, and his son, Walter White Jr, as much security as he can before he dies. He teams up with a former student, Jesse Pinkman (Aaron Paul), to produce and sell crystal meth.

Skyler White is the worst, most hated character we have ever watched in any TV show ever. We hate her more than Joan Crawford hated Bette Davis. Fun side note and shameless plug for Ryan Murphey’s new show,  Feud. Feud is only a few episodes in on the FX Network. Sunday nights. If you haven’t seen it we suggest you get on demand or DVR.

Back to the hate of Skyler White. She is a nagging, bitchy entitled slut butt. She is actually the only character with morals and the only one not living in deviance when it all begins. Skyler is more like the realistic foundation we need  because we get lost in this crazy world of meth dealing. We only hate her character so much because the actress behind it, Anna Gunn, is incredible. Her work on Breaking Bad won her more awards than if  Adele released an album made entirely of her own farts.

This just makes her the worst because Walter White is the ultimate anti-hero but we root for him. We want him to succeed with his meth business and we actually enjoy watching his downfall more than we should. It takes about 3 seasons before her character becomes someone we can get on board with. But too little to late as there are only 5 seasons of this amazing show.

The show has 7 episodes in season 1 and about 13 episodes for seasons 2-4. Season 5 pulled a Mad Men on us and split up in two parts. The first 8 episodes of season 5 were aired a year apart from the last 8 episodes. The episodes are all on Netflix so it doesn’t affect your binge watching skills. In all honesty, the show is so thrilling and suspenseful that we would not sleep just to find out what would happened next. Each episode is about 45 minutes long so it will take some time to binge the entire series.

One aspect that we loved is the actor playing Walter White Jr. RJ Mitte plays Walter’s son who lives with cerebral palsy. He doesn’t have to act as much as you’d think as he suffers from cerebral palsy in real life. We love that he is bringing awareness to disabilities and proving that you live your dream no matter how hard life can get. We respect and admire him for his bravery, talent and pioneering spirit.  We believe that differences don’t break us, they make us.

The show gets about as crazy as crazy can get. Box cutters and blue meth are just two of the many things that blow our mind continuously during our breaking binge. The suspense is killer. It is as intense as Lost if Lost was realistic and believable. The drugs are just an added bonus to keep the chaos factor at an all time high throughout the series. Who doesn’t love watching drug lords feud over who’s the boss and who runs the world.

For those who don’t get drug lingo, it means that the meth is not cut or tainted with other products. Usually a drug dealer will taint a product like meth with other common substances like Advil or baking soda so they can sell more of the drug but give less quality. This means that people keep coming back to buy more of your drugs because you are giving them smaller doses of the actual substance they want to abuse.

This means that Walter White can create the monopoly on crystal Meth. He gives you your drugs at excellent quality that no one can compete with. So therefore he becomes Heisenberg as a drug king pin alias. Everyone wants him and some want to be him because he makes a flawless product. Basically the drug lords can’t kill him because he won’t share his recipe with them and the police can’t catch him because he is a nerdy chemistry teacher by day and Heisenberg by night. This doesn’t give anything away but just helps set up how intense and amazing this plot actually is.

We highly recommend this show because the power hungry demise of Walter White is one amazing roller coaster ride than we never wanted to come down from. The twists and turns of the show are next level perfection. It is as crazy as watching a meth head spiraling out of control and we love crazy antics with insanely satisfying plot twists.

Our only warning here is that it is intense. VERY INTENSE. Like we had to take a binge break between some episodes because sometimes it was just too much to handle all at once. If you love intense then you will be right at home but don’t try and binge this show without expecting some anxiety to follow you. We loved the intense nature so it is not at all a negative aspect, just an aspect we appreciate when beginning a new show. Realizing the tone of a show can mean the different in weather you will be binge watching or binge eating. Probably both with Breaking Bad.

This show belongs with our list of 5 stars shows we have ever found on Netflix, or on TV for that matter. If you haven’t started this one, begin today. The only regret you will have is that you didn’t let this show into your life sooner. The show actually became the most critically acclaimed show of all time in 2013 according to the Guinness Book Of World Records.

If that wasn’t enough, the show received 16 Emmy Awards in its 5 seasons run. Bryan Cranston, Walter White, won the Emmy for Lead Actor four times for this show. The show also gave Anna Gunn, Sklyer White, the Emmy for Lead Actress twice. And finally Aaron Paul won the Best Supporting Actor Emmy for his work as Jesse Pinkman on Breaking Bad. Awards and records aside, this show is just THAT GOOD. Much like the blue meth, let Walter White’s work speak for itself.