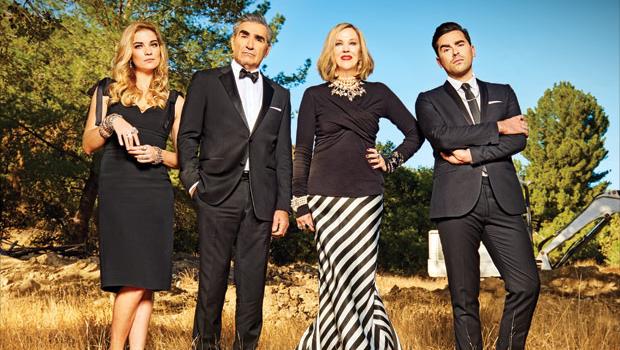 If you have ever felt like you were “Up Schitt’s Creek” then this is the show for you. Everyone experiences highs and lows in life and this show uses the lows to bring us laughter and good television.

This is satirical comedy at its best. We cannot get enough of this show. Every time we watch Schitt’s Creek, we laugh and we laugh hard. If not at the hilariously refreshing plot, it is the extreme nature of each sensational character. We started watching this show out of boredom and our love for Catherine O’Hara. Catherine plays (favorite character alert) Moira Rose, the mother.

Catherine O’Hara is the mother from Home Alone, Home Alone 2 and Beetlejuice. She is by far the most outstanding and hilarious character the show has to offer and we are not disappointed. Also side note, she may have gotten older but she has only gained talent with age.

The show focuses on an insanely rich family, think the Hilton family, who are all of a sudden out of money when the government seizes their assets and bank accounts. Their accountant had not paid his taxes in years and took off with billions of dollars, therefore leaving the Rose family with nothing.

The only silver lining in making this family not fall into a homeless depravity is the fact that the father bought a town. This town is obviously called Schitt’s Creek. The town was purchased by the father (the dad in the American Pie anthology). He bought the town for his son as a gag gift one year when his company was doing exceedingly well.

The children are rich and spoiled and the parents have not had to work for their wages in decades. This is exactly the best set up for a hilarious adventure everyone wants to see. When they arrive to Schitt’s Creek, they find out how small the town really is. With only 1 stop light, 1 restaurant and 1 grocery store, the tale of riches to rags is just too funny and too universal not to appeal to a huge audience.

David is the pansexual (loves people for people not gender) son who has relied on modeling and good looks to get by in life. David is obviously super gay and bitchy but surprises us with his love interests in season 1. The daughter is Alexis, who has spend an obscene amount of time overseas being kidnapped by dictators and vacationing in Italy to actually understand the real world.

The father is Johnny played by Eugene Levy of the American Pie series. He not only stars in but created the entire show with his son in real life. The mother is Moira, a washed up, alcoholic soap opera star who relies on medication and money to manage her life and her time.

What could be more perfect than watching rich, over-privileged, clueless upper class people get down and dirty in the literal sense?

The answer is nothing could be more perfect. The struggle alone of going from people waiting on you hand and foot to having to change your own bed sheets speaks to the poverty in us all. It gives us a sense of empowerment to know that we can survive in life without having to have maids or chefs or nannies. (Except The Netflix Nanny of course)
We recommend this show to all our comedy lovers out there. The sarcastic nature and obvious stereotyping is all meant for a good laugh but it is NOT for everyone. This comedy is a hit or miss with people. Either you LOVE it or you will HATE it. We suggest watching an episode or two before you decide whether you want this to be your new binge.

Each episode is 20-something minutes long with 2 seasons currently on Netflix. It took us about a week to finish, due to all the shows we watch everyday.

(By the way, we watch new shows everyday so we will never run out of content for you).

The show is short, fast and easy to binge. The third season just started in January on TV so it will most likely end in late March or April and be uploaded to Netflix shortly after.

We could not get enough of this little diamond in the rough we found. We urge anyone with a love of laughter and an open heart to please start this show right now. If anything Moira will make you laugh so hard you cry and will make you want more.

We have only seen a bit of season 3 on TV. All we can say is the show is consistent and follows suite with everything we want from it. Stop reading and start watching today.