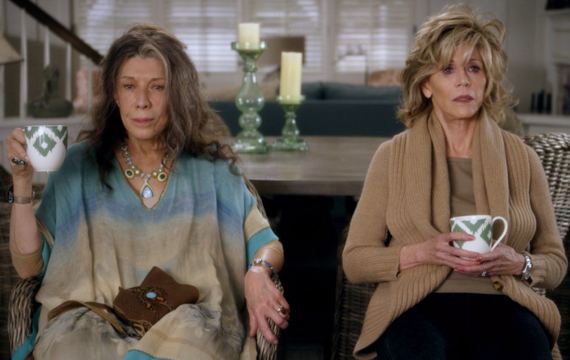 If you are not old enough to know the names Jane Fonda and Lily Tomlin then you may want to go ahead and stop reading now. For those who don’t know, our best is as follows.

Jane Fonda : 2 time best actress Oscar award winning famous actress. Peaked in the 70s until her career took a huge dive with her becoming a work out video person in the 80s. Also there was this whole mess about communism or something where her political beliefs were bordering on anti-american.

Lily Tomlin: Actress, comedian also peaked in the 70s and continued a relatively strong career and established herself as a comedy legend. She did to comedy what Casey Anthony did to her daughter. She killed it.

So this show is like a modern day  odd couple but with women. Now granted both these women are now 75 or older so they look INCREDIBLE for their ages.

So Grace (Fonda) is like a boujie waspy uptight alcoholic who is like that distant grandma that drinks all the time and is always getting her hair done.

Frankie (Tomlin) is a free spirit, essential oils, salt rocks, no clocks, live your own truth hippie type. So it is fair to say that we know how this will end.

So the plot is that Grace and Frankie are like 20-30 years married to their husbands who work at a law firm, own a law firm, ok well they are lawyers that’s all we got out of it. Anyway the two men are very close and the two families share a beach house together. Grace has two girls and Frankie has two boys, both sets of children being adults now.

So the show opens to Grace and Frankie hating each other over a dinner table waiting for their husbands. As it turns out, their husbands show up to announce they have been in a relationship together since they met some 20/30/40 years ago. So yes the men are gay for each other.

The show then focuses on the aftermath of that glitter bomb the husbands just dropped. Basically we find Grace and Frankie stuck in the beach house they share. Living together while trying to work through the last 20/30/40/50/60/70 years they have been alive and married to gay men.

This show is a classic dramedy (drama-comedy). It has many elements of drama but mixed with tons of good humor. Both Grace and Frankie are a hoot and play their characters with such poise and ease.

These woman are professionals and totally pull this off. We are loving the whole gay husband twist, as the husbands are the other two main characters played by some NCIS dude and Charlie Sheen’s dad. We really only care about Fonda and Tomlin to be honest. #savage

It’s a great show and if you are old enough to remember these ladies in their prime, you will not be disappointed.

There are 2 seasons of 30 minute episodes so it won’t take you long to binge the whole series. A week tops. Also favorite character alert: Brianna. It’s that dark headed girl who is hilarious and sarcastic that we know ya’ll have seen before. Her name is Diane Raphael. Enjoy.

We highly recommend this one as a night time before bed binge session. We say give it a few episodes normally but if you watch the pilot or the first two episodes and aren’t into it then you won’t like where it is headed.

The show is more mellow, chill, low key than the others listed but still packs a pretty heavy punch.

UPDATE: Season 3 is out now on Netflix. This show does not disappoint for its third season and continues the trend of getting better with age. Like a fine wine, or a great actress, everything about Grace and Frankie gets better with age. We suggest you get on top of season 3 as soon as you can because we have plenty of shows left to recommend.